This winter, I joined a running club called Hatu Harriers (Hatu is Utah spelled backwards, and I think a harrier is a runner?).  We usually run together Tuesday nights and sometimes on Thursdays or the weekends.  A guy Ed heads it up via facebook and organized a trip down to Boulder City, Nevada (right outside of Vegas) for a trail run last weekend.

6 of us from Park City made the trip – From varying distances, I chose to run the 30K (normally 18ish miles, but this course was 19.4).  I’m training for Big Sur Marathon on April 27, so this is a good length for a training run. 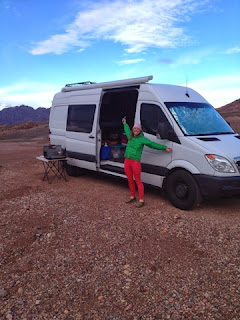 Nicole and I drove her new camping van “Polar Bear” down there.  Her kids Margot and Zoe named it that.  I think it’s very fitting. The van was awesome!  So easy to just park it and go to bed on Friday night – and it had a heater, so we stayed nice and toasty in the nighttime desert chill. 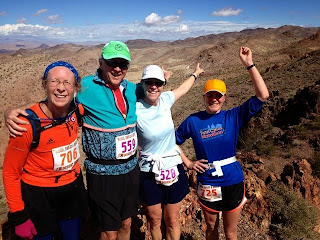 Saturday was the run – here’s a photo of some of our group at Mile 10 or so.  We’re all pointing at the nice view! 19.4 miles finished – 4 hours 41 minutes later – it was a tough course!  Super hilly and rough, but great training.   I got 3rd in my age group too – that’s the highest I’ve ever placed.  I won’t tell you how many there was in my age group though! 😉 Nicole got 2nd overall female.  She’s a rockstar.  She came in over an hour before me! Couldn’t have asked for a better dinner.  I freaking love pizza. 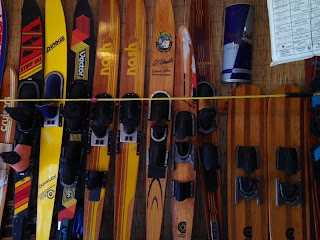 On Sunday morning we went to a breakfast place called The Coffee Cup.  Boulder City, NV is on Lake Mead near the Hoover Dam, and water skiing is big there.  Anyone recognize a pair of these water skis? After breakfast we went for a mountain bike ride – biking after a long run helps you be less sore and soaking in some more sun in shorts while it’s snowing at home, helps give you a short taste of summer just for a few more hours.  Good decision all around!