Last weekend, Chris and I decided to go to Breckenridge, CO.  We left Friday morning and got back late Sunday night.  It was a quick trip, but an easy decision to make when we realized it will really only cost us gas and food.  We had free lift tickets because Breckenridge is owned by Vail and we both have Epic passes (mine’s an employee one), which let you go to any Vail Resort anytime.  We had a free place to stay because Brownie was there for an U.S. Freeskiing/U.S. Snowboarding event and she had an extra room in her condo.  Win Win! 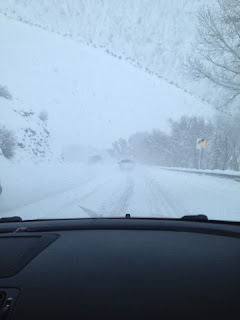 Friday morning, Chris and I looked at two routes we could take to get to Breckenridge and the weather was great in Park City and looked okay en route to Colorado, so we decided to take the more interesting route and it was indeed more interesting! 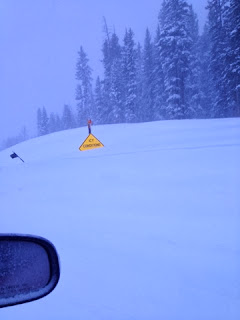 Just past Steamboat, CO we were driving on this mountain pass – You can’t see the road and the snowbanks are so high that it covers the sign there.  Chris was driving and I was taking this photo, don’t worry.  He’s a very safe driver and takes it too slow, if anything.  I think we were going 20 mph maximum through here.  I tend to be a little more risky and impatient driver, so I’m glad it was conservative Chris!  He’s so patient. 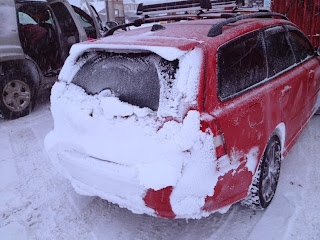 We finally got off the mountain pass and here’s what Lobster looked like.  Thank God for all wheel drive and snow tires.  He was a champion for sure! 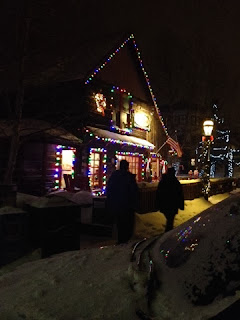 We got to Breckenridge just time time to join Brownie and her co-worker Sarah for dinner at this cute little BBQ place on main street.  Breck’s main street is very similar to Park City, for sure a nice little ski town. 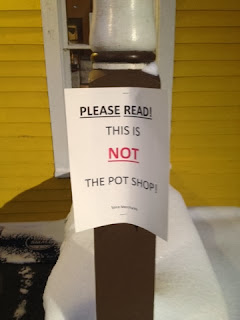 Many of you most likely know that weed is legal in Colorado now.  They just sell it in shops – we went looking for a shop to see what it’s all about, apparently the shop is not here.  We eventually found the shop, checked it out (no photos allowed there) and left because we had no idea what we were doing- none of us are experienced in this type of shopping. 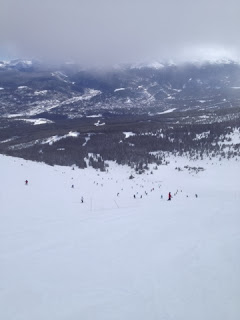 It snowed on Friday night into Saturday morning and we woke up to 8″ of fresh snow – holla! 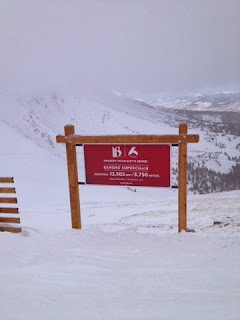 Here’s Peak 6 – it’s brand new to Breckenridge.  I’d heard a lot about it at work, because Vail put a lot of investment into expanding the terrain, so had to check it out.  Breckenridge is organized by different peaks – there’s Peaks 6-10 now. I think Peak 10 was our favorite. 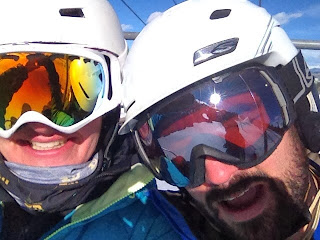 It eventually got sunny and we took this selfie on the chairlift.  Chris looks like he’s sleeping though.  You can see my arm in my goggles taking the selfie, cool! 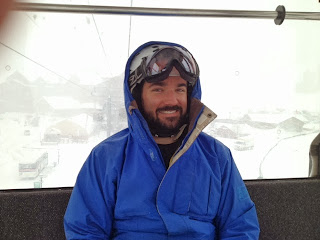 We had to ride the gondola to and from our car which was perfect for Chris.  He always says how much he likes decompressing and ending his day by a gondola ride.   He looks nice and peaceful here, with a little bit of a goggle tan? 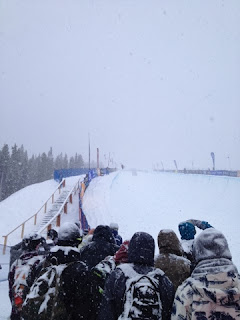 The U.S. Freeskiing event was supposed to be on Saturday, but got rescheduled to Sunday – it was dumping snow on Sunday – you can barely see the athlete on the pipe here! They’re on the far left. 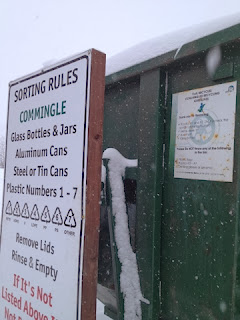 After the event, we hit the road and made a stop before we got out of town – the recycle bin!  I was collecting everyone’s recycling in our condo and got to get rid of it before we drove home with stinky cans and bottles.  Awesome! 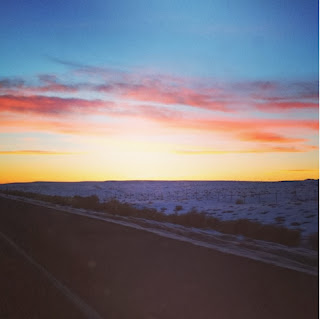 We drove home on interstates versus the mountain pass we took to get there – here’s a nice sunset just outside of Moab, UT.