Chris and I have become huge fans of the 1 nighter camping trip.  We normally both work on Sundays, which causes us to miss out on some trips with our friends, so we started a one-night thing a couple years ago, where we just go for Friday and come back on Saturday night.  Pretty much all of the time, we leave feeling recharged and ready to take on another workweek.

Last weekend, we went climbing with some of our climber friends.  There was a group of 7 of us total and Chris and I climbed the least.  They go pretty regularly, like once a week or more.  I climbed when I first moved to Utah, but haven’t done much in the past 4 years.  Chris doesn’t really like it, so it’s not something we do together, so it makes me less likely to do it on my own.  After this weekend, I’m itching to get back into it!  I had so much fun! 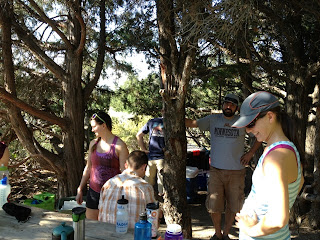 Finishing up breakfast, planning out the day.  We had a nice and shaded campsite – it was especially great in the hot afternoon! 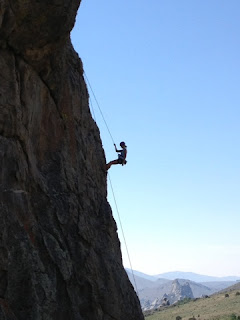 The first spot we went was called Owl Rock – here’s a neat photo of Irene, from my cell phone.  I did bring the camera later in the day!  She’s top rope style climbing here.  Someone else climbs the rope up (lead climbing) and “threads it” through bolts in the rock ’til they get to the top and then there’s a big anchor (bolted into the rock) up there that they loop the rope through.  Irene climbs this with one rope above her and a belay person below, if she were to fall, the top rope would catch her.  It’s a fairly safe way to climb. 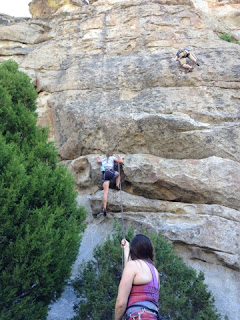 I wasn’t even sure if I was going to climb, but I saw everyone up there and wanted to give it a shot.  Here’s me climbing my first route- top rope, just like Irene.  I’m not advanced to lead climb.  It was tough to get back out there and scary!  I didn’t realize how much confidence I built up 4 years ago when I did it. After lunch we went to Window Rock (I think) and did some slab climbing – meaning it’s just basically a “sticky” rock face with some cracks in it that you grab on to.  We set 2 routes on this wall.  You can see Brett coming down after his climb. A neat shot of Jeanna getting after it!  Can you tell that we brought our camera to the spot this time? Troy setting a route.  See how he doesn’t have a rope above him?  He’s going to fasten the rope to the rock to set it up as a top rope style climb.  Troy is a very impressive climber! I would consider this way too hard for me.  Go Troy! This is Chris’s favorite photo of me.  I stick my tongue out of my mouth when I’m thinking about something.  I am doing that here, thinking hard about what to do next.  Climbing is very much about solving a puzzle. Long legs are helpful for sure! An easier part of the climb because the rock slants in a good direction.  Woa, I was happy about it – I was exhausted! Climbing Girls:  Me, Irene, Sarah and Jeanna!  (and Pudgy, Irene’s dog too) Chris and I left early on Saturday night and as we were walking away, we saw Troy at the top of the rock in the window.  Cool!
I guess this post ended up a little educational for you.  I still don’t know a ton about climbing and have a lot of room to improve, but hopefully you got a better understanding now – thanks to everyone for a fun weekend!