In case you haven’t heard, Chris and I are going to Nepal.  We’ve been planning it since early this summer and it’s finally going to be time to go! Since we booked the trip, we’ve gotten a lot of questions about where we’re going and what we’re doing.  Hope this blog post will help clear things up!

I’m going to make an attempt to update the blog on the road, but am not sure how internet will all work out.  I’d love to give you somewhat recent photos with captions, but won’t be doing any sort of serious writing.

Q:Where is Nepal?
A: Nepal is in Asia between Tibet (which is part of China) and India. Check out the map below- we’ll be spending most of our time in Kathmandu and Pokhara. 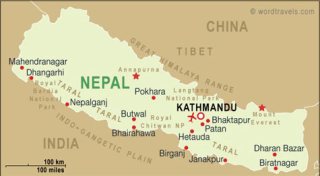 Q:What are the people, customs and culture like in Nepal?
A: Most people are Hindu and Buddhist, the speak Nepali as the main language.   This “Do’s and Dont’s” list is pretty interesting in better understanding what people are like.

Q:What are we going to be doing?
A:  We’re mostly doing a trekking trip- where we’ll spend a lot of time hiking from place to place and seeing sights along the way.  We only carry a day pack, as we have a “porter” carrying the bulk of our stuff from place to place and are also leaving things in Kathmandu that we don’t need for the trek.

Here’s a link to the actual group that we booked through.  I separated the itinerary out day by day below.

Here’s a “photo of the day” type gallery of something we’ll see or do each day, so you can get an idea of what we’re going to be up to.  (Big thanks to the owners of all the photos I borrowed off the internet – if the owner has a problem with my use of them, please contact me and I’ll happily remove it.) 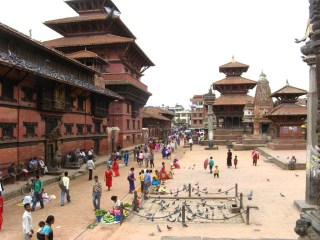 Durbar Square in Kathmandu.  The first couple days with our tour group we spend in bigger cities not doing any trekking on the trail.  We’ll be there on Sunday, Oct. 14

On Monday Oct 15, we take a 6 hour drive to Pokhara (a city of Lake, literally); a city that offers us the magnificent view of various mountains namely Dhaulagiri, Manaslu, Machhapuchre and other mountain of Annapurna range.

Tuesday October 16 is our first day of trekking.  We reach Tikhedhunga – maybe cross a bridge like this?  Looks like lots of people that have trekked there have crossed it.

Our itinerary says that October 17 should be pretty hard.  There’s 3300 steps up to Ulleri.  Good thing we were in marching band and did high step practicing.

We do a morning trek on October 18 to watch a sunrise on Poon Hill, and then hike through forests with monkeys, birds and other animals to Tadapani.

On October 19, we hike along the Modi Khola river/creek to Chomrong. 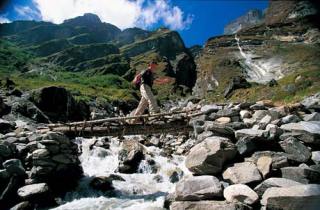 On my birthday October 20th, – We hike down from Chomrong, then hike up to Khuldighar and spend the night in Dovan.  Hope there’s a party waiting for me there! 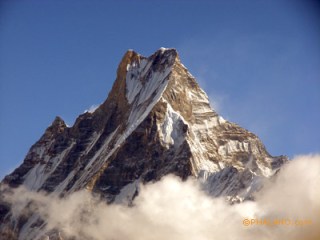 On October 21, we stay at Machhapuchhre Base Camp, also known as Mt. Fishtail.  We’ll be staying in a teahouse at the base of this peak – not going to the top, don’t worry!

On October 22, we start to really get into the Annapurna region, it’s called the Annapurna Sanctuary since it’s an area totally surrounded by mountains.

On October 23, we stay in a place called Bamboo – doesn’t it look beautiful and relaxing?

On October 24, we’re going to Jhinu hot springs – looks like a party!  I better bring my swimsuit!

On October 25, We trek to Nayapul and then take a bus back to Pokhara, where we were on October 15 and have time to relax there.  They suggested getting a massage, sounds kind like what Jen and Christian did on their honeymoon.. so nice!

On October 26, we take a little plane, maybe like this? Back to Kathmandu.  I might just throw up on it, will for sure have to wear my motion sickness bands and have some dramamine! 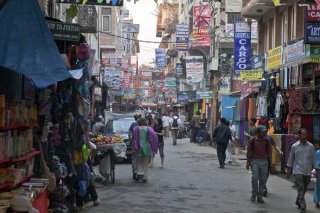 On October 27, we have some free time to spend in Kathmandu before our flight on Sunday.  We might do some shopping or go see Stupa like the photo above.  There’s a lot of them around Nepal and it seems pretty interesting, read about them here.

Q:Where will we sleep?
A:  We’ll sleep mostly in teahouses and sometimes in hotels.  We don’t normally know the exact name of the place we’re staying, as I’m thinking we’ll pull in and our guide will figure it out.  Here’s a good article to help you better understand teahouses.  They do more than serve tea. 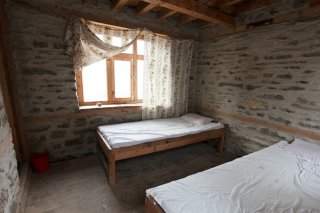 Where I sleep could look like this.  I’ll be sleeping in a sleeping bag.

Q:What will we eat?
A: Breakfast, Lunch and Dinner are included in our tour and most breakfasts and dinners will be at teahouses and lunch will usually be on the trail.  I’m pretty sure we’ll be eating a lot of rice and vegetables, which is a’ok with me!

This is called Dal Bhat. Dal refers to lentil and Bhat refers to rice. Dal Bhat is often for breakfast, lunch and dinner. First get a pile of rice – Bath, and the lentil soup. At the edge of the plate will then accumulate Annex a spicy mixture of potatoes and vegetables – curry, spicy blend of meat and spicy chilli sauce.  From this site.

These are called momo’s.  They have meat inside, sorta like a dumpling with spicy sauce to dip them in. Chris and I tried them at a Tibetan restaurant a couple weeks ago in Salt Lake called Cafe Shambala.  Yum!