Snowflake and I have had a rough month.  She was such a champion going to Wyoming to get Christmas Tree #6 early in December and now it’s the end of December and I don’t own her anymore.

As you’ll see in the following post – Chris and I get pretty attached to our cars.  For me, it’s because I trust my car.  I know she’ll get me on fun adventures, across the country (like when I moved from MN to UT and back with her), and when conditions get bad, I know she and I can do what it takes to get home safely.  Snowflake’s been with me through a lot and saying goodbye is hard to do.

About 3 weeks ago, Chris and I were driving home from a holiday party and I was having a hard time getting up a hill to our house.  Snowflake wasn’t running well at all.  Almost as if she was running on 1-2 cylinders instead of 4.  We got home safely and were able to diagnose a little bit on our own and stop/start the engine, so figured we’d drive it down to the shop in the morning.  The next morning, she didn’t start at all.  So we had to push her out of the garage and take Chris’s car, Lobster to work.  Chris did some research and found a part to put in it that should do the trick. 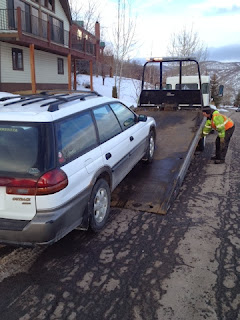 The part arrived 5 days later, we put it in and still nothing… So we had her towed to the shop down the road.   The tow truck guy was super nice and upset that Snowflake was having issues.  He actually just bought the same exact car for his girlfriend with more miles! Agh! 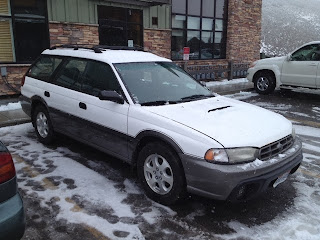 We got BAD news from the shop – none of the cylinders were getting any compression and they weren’t sure why.  It’d be around $1000 to go in and find out and then maybe an additional $4000 to replace the engine. No!  She had 170,000 miles on her and at this point, I’m not sure the $5000 would be worth it or better spent on a new Snowflake. 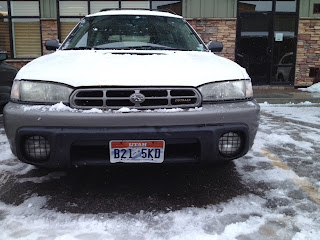 After a lot of thinking, I decided it was time to retire Snowflake.  I didn’t want to, but had been saving money for this day to come and it’d just come sooner than I was hoping.  I really wanted to drive her to 200,000 miles.  Darn! 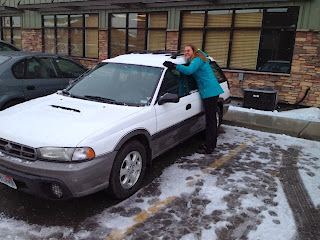 We cleaned my things out of her and took some photos to post to sell her online.  I’m giving her a big hug here. She was so good to me, there are times I’d get home from driving in a bad snowstorm and hug her like this, give her a high-five or a kiss.  She’s kept me safe since 2007. 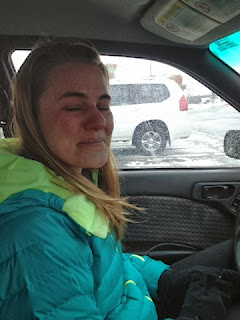 I was crying and told Chris it was okay to take a photo.  I feel like I let her down.  She was so good for so long, and I gave up on her.  I’m sorry Snowflake!  One of the Subaru taglines is “Love.  It’s what makes a Subaru a Subaru.”  I’m pretty sure this would qualify. 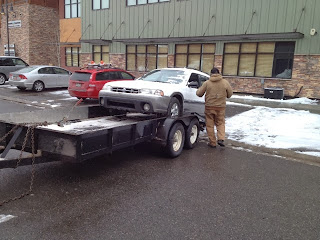 This story does have a happy ending – We posted Snowflake on ksl.com – they have a classifieds section and she sold within 3 hours!  A really nice guy named John from Jackson Hole, WY wanted to buy her, put a new engine in re-sell her.  He loves working on old Subarus and thought Snowflake had plenty of life left in her.  He even asked what her name was and I said Snowflake, and he said he’s worked on Snowball, Yeti and a bunch of other Subies with snow names.  I knew it’d be a good fit.  I’m going to be keeping an eye out for her – she’s got a new life ahead.  Just hoping the next person will love her as much as me. 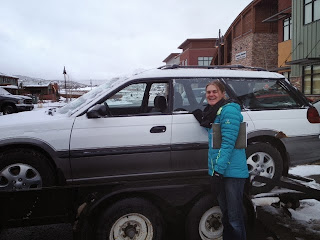 Loaded up and ready to go.  I’m not crying anymore.  It’s so nice knowing she’ll end up in a good home in another mountain town. 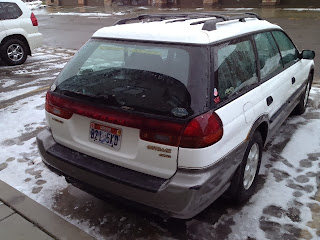 I followed Chris’s lead and didn’t remove my “University of Minnesota” sticker.  Who knows, maybe her next owner will like the Gophers too? 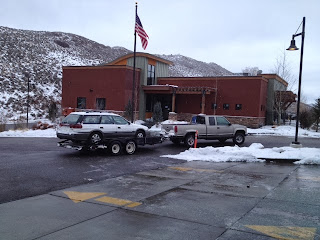 Goodbye Snowflake.  I know you’ll do well in your next adventures.