Chris won a Vegas trip at a work party last spring and as soon as he won we emailed a bunch of our Las Vegas friends to see who wanted to join us on our trip!  Ann and Andrew were in and we were trilled!  We originally planned this trip for the fall, and they had to cancel so we rescheduled it for last weekend.
It was a really quick weekend and there weren’t any big winners, but we all had a really good time.  Chris and I took Friday off work and drove down to Vegas on Friday and picked Ann and Andrew up at the airport Friday night and drove them back to the airport on Sunday.  We really only had Saturday, but that was totally enough time to gamble, drink and party.  If it was summer, we’d for sure need a few more days for being lazy by the pool or maybe going to Hoover Dam or Grand Canyon.

Big thanks to Ann’s parents for watching Maddie, so that we could play with her Mom and Dad all weekend! 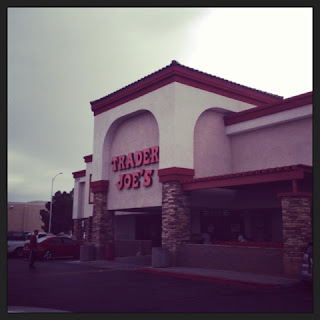 Our first stop was at Trader Joe’s for some Two Buck Chuck to import back to Utah.  The Trader Joe’s in Utah do not sell alcohol. 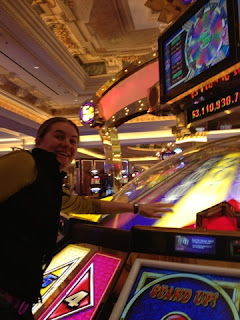 Friday night the gambling began.  Here’s me playing some Wheel of Fortune.  We love spinning the wheel, right Kit? 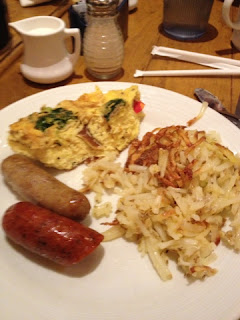 Late on Friday night, we asked Ann and Andrew what they wanted to do for breakfast in the morning and within 30 seconds we all decided Paris buffet was going to be the place.  I ate this plate and a crepe.   I’m usually not a big fan of buffets because I can’t get my food to match – I like food to “match”, like a burger with fries or spaghetti with salad.  It’s hard to consciously do that at a buffet.  BUT.. with a all breakfast buffet, it’s pretty easy.  Perfect. 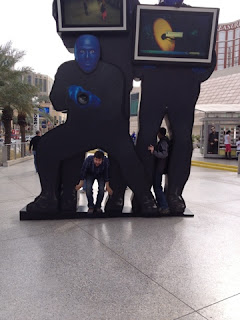 Chris and Andrew inside the Blue Man group 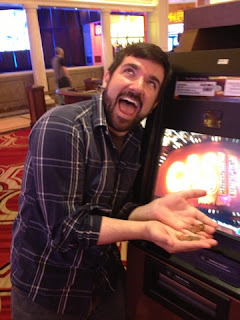 Some of the change machines where you turn in your ticket gave out pennies instead of nickels. Before long, we had over 30 pennies and needed to find a use for them. 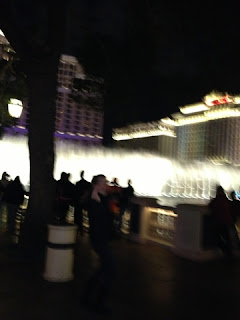 Andrew and I found a use for pennies and threw them in every fountain we passed. Sometimes this meant over people’s heads like in this photo!  We had a lot of fun with such a stupid little game. 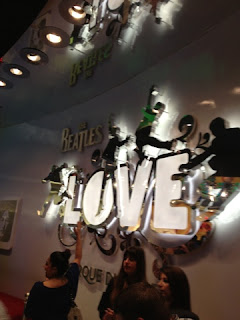 Saturday night we went and saw Cirque du Soleil’s Love.  It was soo good!  I highly recommend it.  We were trying to decide between that show and Jersey Boys and I’m glad we splurged a little and went with Love.  Can’t go wrong with 90 minutes of straight Beatles music. 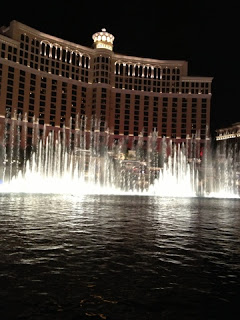 I really like the Bellagio water show – we got to see it twice! When we were walking to see Cirque du Soleil, we heard “In the Mood”, but were too focused on throwing pennies and walking fast to get to our show in time.
Since we didn’t enjoy the Bellagio show very much the first time, we got really into it for the second.  We were all pretty bummed about the choice in music, but made the best of it.
Chris took the other video, and needed his own turn to shine, so I took a video of him.  Proud to be an American.