Chris and I took some much needed time away from work and took a road trip out to San Francisco for a long weekend of sightseeing, relaxation and marathon running.  There was a lot of change and drama at work with the Vail purchase, so it was nice to get out of town and separate our brains from it all for awhile. 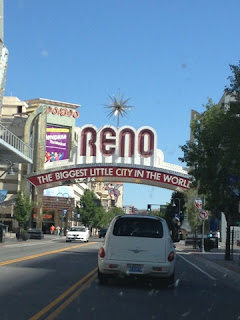 We left after work on Friday and drove to Reno, NV for the night.  On Saturday morning, we had a delicious breakfast at Peg’s Glorified Ham & Eggs before heading on the road to finish our trip to California. 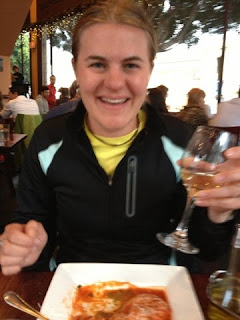 We arrived in San Francisco Saturday afternoon, picked up the marathon race packet, checked into our hotel and had some pasta for dinner. Sunday morning was race day!  Here I am at mile 6! It was a really pretty course, we ran across the Golden Gate Bridge, alongside the coastline, all through Golden Gate Park, by Fisherman’s Wharf, down Haight Street, by the Giants Stadium – such a neat way to see a new city!  I’ll be using this technique again! Running through Golden Gate Park.  This race did not have as many spectators at Twin Cities Marathon, and no custom Kit & Mary signs.  🙁 Coming in on the finish line at the Embarcaradero with Bay Bridge in the background. 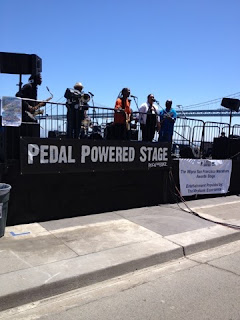 At the finish area there was a band playing powered by people riding stationary bikes.  Cool! 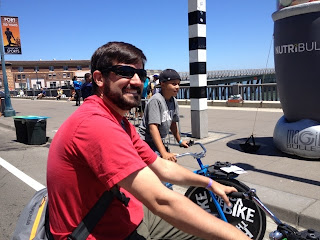 Chris is helping to provide music by riding this bike. After the race we went back to our hotel for a nap and then rented bikes to ride to the Golden Gate Bridge. Riding our bikes across the bridge. 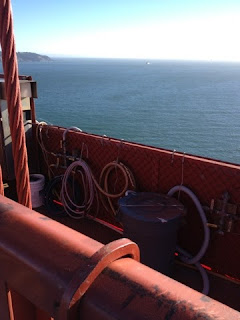 My Grandma always says that they’re constantly painting the bridge.  She was right.  Here’s their “paint cart”.  I thought of her when I saw this! 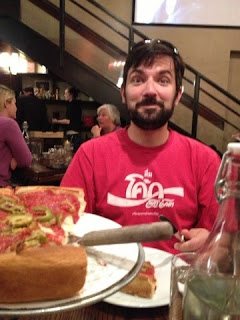 Chris really likes Chicago-style deep dish pizza so looked up a place he wanted to go for diner.  After a marathon, anything sounds good, so I was in!  Yum! 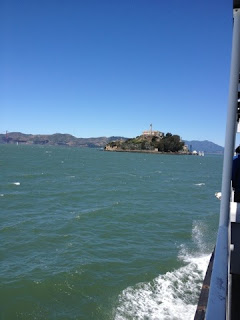 Monday morning we went to Alcatraz, here’s a view from our boat ride there. Seals at Pier 39.  Was hard to pull Chris away from these guys! That night we went to the Giants game- a do love Target Field, but this stadium is on the ocean! 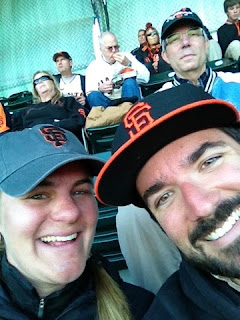 We bought some new hats, do you like ’em? Tuesday morning we met with some of Chris’s contacts from work who have their office in San Francisco and then went out to Muir Woods.  It was nice to get out of the city.  Both of us got rejuvenated spending some time out on the trails. I never went to see Sharon when she was living at High Trails, but I imagine she took her classes out on hikes on trails like this? Enjoy this photo a lot, because it took us 10 minutes to take it.  There was a group of 15-20 French tourists who all had to go take a photo of themselves in there before we got our turn.  They’d go in this spot and do funny stuff and take photo after photo and laugh really hard. 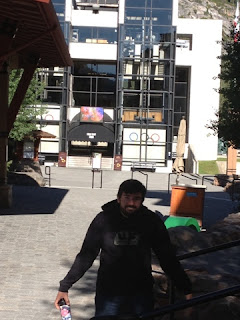 On Tuesday night we stayed in Squaw Valley. 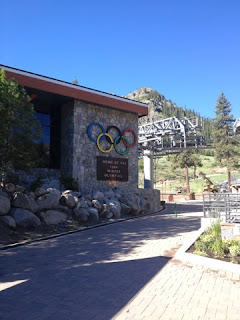 Squaw Valley, USA – we will have to come back here and do some snowboarding this winter!

Wednesday morning, we stopped and saw Lake Tahoe on our way out of town.  It was nice to see a real lake!  Most lakes in Utah are man-made reservoirs.  Reminds me of Leech Lake in Walker, except with mountains around it.  It was very chilly there! 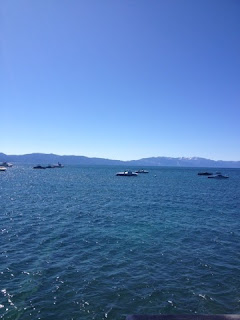 The shores of Lake Tahoe aren’t necessarily sandy, so people keep their boats out far. Goodbye California!  Time to head back to Park City!